Heatwave conditions were witnessed over the national capital in last few days. To such an extent that the temperatures had crossed 45-degree mark. However, there were few occasions when Delhi and NCR region recorded good showers.

In fact, intermittent rainfall activity was observed during the last week that made the temperature to curtail down by 11 degrees. However, the maximum temperatures once again scaled up in Delhi and settled around 44-46°C.

In last 24 hours, Delhi recorded light to moderate rain with squally winds at scattered places. In a span of 24 hours from 08:30 am on Saturday, the Safdurjung Observatory recorded 12 mm of rainfall; other districts that recorded some showers include Ridge, Palam and Ayanagar. 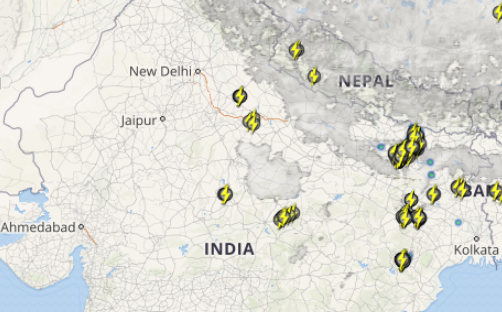 Live lightning and thunder over Delhi and NCR

These rains can be attributed to an upper air trough that is extending from North Rajasthan to east central Bay of Bengal. Also, an upper air cyclonic circulation lies over western parts of Uttar Pradesh. With the influence of these systems and moisture laden winds coming from Bay of Bengal up to the region, spell of rain and thundershowers with squally winds will occur over Delhi and NCR between May 28 to 31.

With these rains, day maximums are likely to decrease significantly. Hence, weather conditions will be a bit bearable